The Long Walk - She Is Mine - Summary of Chapter 4

One day as Sook Hee worked in the cafeteria. Her stomach tightened with aching nausea. She had feared for weeks now that she carried the child of the American soldier. But he was gone. He had spoken to her one day a few weeks before. She did not understand English well enough to understand everything he said but she recognized some words: “Leave…America…home…good-bye.”
She had suspected at that time she was pregnant, but what good would it do to tell him? Her world was spinning out of control. Her situation felt so impossible that she wasn’t certain she could go on living. 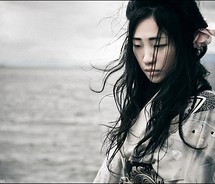 Five months later, Sook Hee was struggling to hide her growing belly under a loose dress. Shame and worry had become her constant companions. If she was to go on living:  She needed to face her extended family.
Sook Hee had put off that journey, a day’s walk, as long as she could. The time had come for her to abandon her stark room in the village and head toward the exposure of her shame.
The gray of dusk had fallen by the time Sook Hee reached her ancestral home, where her eldest uncle, his wife, and their children lived with her grandparents. “Hello. I am here. This is Sook Hee.”
The lantern light spilled out of the room and spread across Sook Hee’s delicate frame. The shameful truth registered on each of their faces. Her family’s silent stares magnified the shame Sook Hee already knew.
“You’ve brought dishonor to our family,” her uncle said coldly. “You are a disgrace to us and to your ancestors! This child may never have our name.”
In Korea, having a fatherless child of mixed blood brought impurities to the ancestral bloodlines. It was culturally unacceptable-a disgrace. And children who were not given a family name literally had no birthright and lived unacknowledged. They were rejected. Worthless. Nothings.
She feared what lay ahead-not only for herself, but even more so for her unborn child, this life growing inside her.