I would love for you to read the below article featured in DGIwire titled, “Human Trafficking Spikes in Wake of Nepal Earthquake.” Let’s continue to keep Nepal and these women in our prayers!

(DGIwire) — In the wake of the earthquake that struck Nepal on April 25, 2015, tens of thousands of women from devastated regions were being targeted by human traffickers, according to a recent article in The Guardian. The traffickers’ criminal purpose: to supply a network of brothels across south Asia.

This is not a new phenomenon for the region . According to The Guardian, the United Nations and local NGOs estimate that between 12,000 and 15,000 girls are trafficked from Nepal each year. But since the earthquake, many young women and girls have found themselves displaced and in desperate situations, which renders them more vulnerable and thus willing to go along with men who entice them with the promise of a job. Sunita Danuwar, director of Shakti Samuha, an NGO in Kathmandu, told The Guardian her group was distributing assistance to make people aware that someone might come to lure them, and that the group was getting reports of individuals pretending to be rescuers.

Senior western aid officials in the Nepalese capital are also concerned. One anonymously told The Guardian that there is nothing like an emergency for opportunities to traffic more women. A 20-year-old woman named Sita told the newspaper how she had been taken from her village in Sindhupalchok, the hill area north of Kathmandu, to the Indian border town of Siliguri where she was sold to a brothel owner, repeatedly beaten, systematically raped by hundreds of men and infected with HIV. The Guardian went on to report that victims of sexual violence are frequently ostracized in South Asia because they are seen as having brought shame on their community.

“It is more important than ever to get involved and help the children left vulnerable in the wake of the Nepal earthquake,” says noted orphan advocate and author Stephanie Fast. “Many thousands of children are now without homes and families to protect them, leaving them at the mercy of traffickers. It is crucial not only to donate money, but also to research where your money is going. Pre-vetted charities…will ensure your money will help support these helpless children and families.”

Fast has a personal commitment to helping orphans around the world because she was one herself. After being deserted by her mother when she was just four or five years old, she was left helpless and vulnerable, nearly succumbing to a premature death in war-torn Korea. Unlike many destitute children in her situation, Stephanie refused to give up. She sensed she had a higher purpose, and fought with every ounce of her being, through hardship after hardship, just to survive.

She Is Mine is Fast’s powerful memoir about how she found the inner strength to overcome her unfathomable circumstances. On her website, www.stephaniefast.org, she details several ways to help address the orphan epidemic. 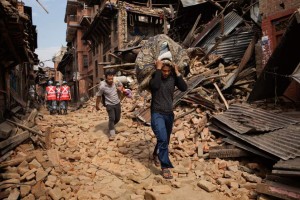 by Adam Ferguson for Time